Why Your Personality ‘Type’ Doesn’t Matter

When I meet new people and tell them I am a researcher at eHarmony, it is usually followed by an array of questions, which I always love answering. Part of my responsibilities here include developing new personality scales to add to our relationship questionnaire, which we then add to our newest matching models to help people find their matches. When some people hear about my personality work, most people think of the Myers-Briggs Test, and tell me they are an ‘INFP’ or an ‘ENFJ’, and ask what I am and how it’s used at eHarmony.

The next part always shocks them: we don’t use the Myers-Briggs. At all. When I tell them that the personality type they just told me isn’t used and doesn’t have much meaning to me, they can’t believe it. The Myers-Briggs is one of the most popular personality assessments, used by hiring managers at many companies, some government agencies, and even some other online dating sites. These tests will categorize you into a certain “type” of personality, either giving you 1 of 16 types, labeling you as a “caregiver”, “idealist”, “scientist”, or a number of others. Here’s a list of why we don’t use it:

The Foundation of the Myers-Briggs

Carl Jung first theorized different categories of personality back in 1921. He did this purely based on his own experiences, and not on any type of empirical testing of the theory. Jung did state that his personality classifications were more rough estimates than actual types, but in the 1940s Katherine Briggs and daughter Isabel Briggs Myers used this as the basis in creating a personality test. However, neither of them had any actual psychology training, so they collaborated with an HR manager from a Philadelphia bank. In 1962, their test eventually evolved into the Myers-Briggs Type Indicator that we know today.

Even Jung knew that these types shouldn’t be used as classifications, but rather as guidelines.

The Predictive Power of the Myers-Briggs (or lack thereof)

Not Widely Used in Research

Although there is a specific academic journal dedicated to personality type research, The Journal of Psychological Type, there is little to no research published in the major personality academic journals. Research that has included the Myers-Briggs has shown that the questionnaire is not a reliable measure of personality. One of the biggest drawbacks of the Myers-Briggs is that it is not necessarily going to give you the same results if you take it again. Recent research has shown that about half of people who take the Myers-Briggs will get different results taking it a second time up to 5 weeks later!

The idea of classifying a person into separate categories isn’t supported by previous research either. If you think about it, these classifications are plain and simple, are you this or this? Take the extraversion-introversion portion, for example. The Myers-Briggs is basically asking if you enjoy being around other people, or prefer being alone. There is no in-between. If extraversion-introversion were simply extremes like that, the data should be a bimodal distribution, in which there are two peaks.

What would justify categorizing extraversion into 2 groups – Introverted and Extraverted

This would show that there are two majorities of people, introverts or extroverts, with little to no people falling in between. However, looking at extraversion levels in 2,000 of our eHarmony users, the data shows what is similar to a normal distribution, in which a majority of people fall somewhere in the middle, indicating somewhat outgoing and somewhat shy, with only a few people being extremely introverted or extroverted. 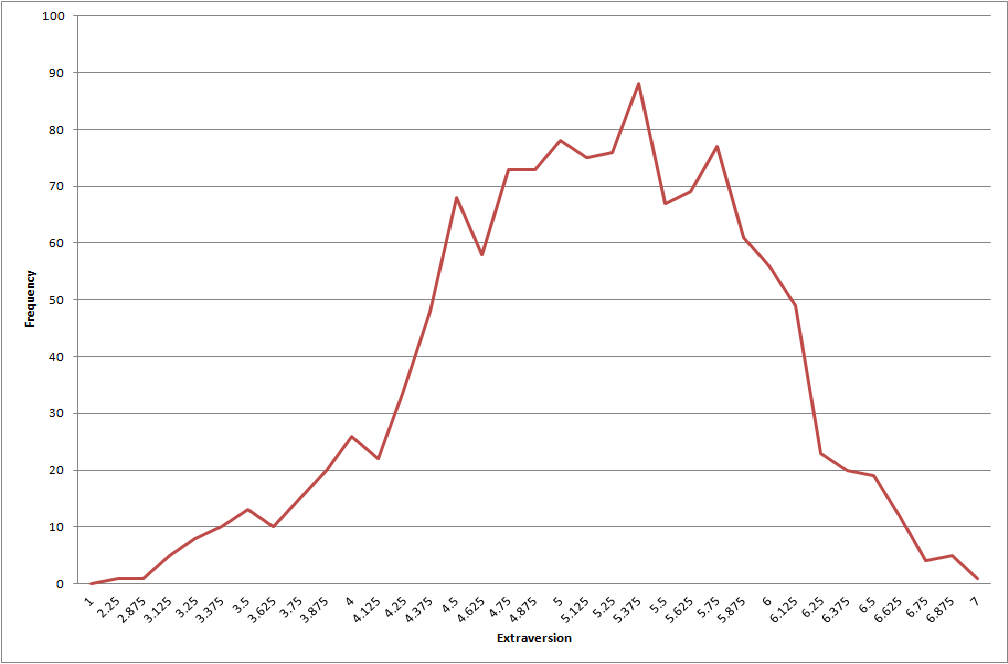 Newer personality measures like the Big Five or the HEXACO assessments include a number of personality factors that are on continuous scales. So you are not an introvert or an extrovert, you can be somewhat introverted, but still enjoy being around people at times. Our eHarmony personality assessment uses an extended version of these types of questionnaires to get the most accurate estimates of numerous personality traits and compares it with the traits of others to find key similarities in personality traits that have been shown to predict an extremely happy relationship in previous research.

Although the Myers-Briggs is one of the most widely used personality assessments in the world, take the results you get with a grain of salt. Many people feel that the results describe them perfectly, but the descriptions are somewhat vague, using a method called the Forer Effect that is frequently used by psychics and astrology. It can be fun to take the Myers-Briggs and compare your results to your friends or post it to your Facebook wall, but according to research, it won’t show you who you are really compatible with any more than this quiz can. However, this could be the ENFJ in me talking.

Your search for a great relationship has never been easier with groundbreaking overhaul of the eharmony you know and trust.