What Do Men and Women Want in a First Date?

All successful relationships have to start somewhere, and most couples can remember the exciting energy of their first date together. As such an important foundation, we wanted to ask eHarmony members about their hopes and fears and what they think is most important on a first date. We surveyed 452 eHarmony members (231 men and 221 women) to understand their thoughts.

Who should ask for the first date?

A date can’t happen without someone making the first move. We found that significantly more women (67%) believe that men should ask for the first date, as compared to only 28% of men. More men seem to believe that either gender could take the lead in asking the other out (71%), while only 31% of women felt the responsibility could rest on either gender.

Both men and women can learn a little something from this: Men, women want you to ask them out on a date, so what are you waiting for? Women, if he hasn’t asked, don’t be afraid to ask yourself — he’d most likely really appreciate it.

Who pays the tab?

Overall, while men tended to hold less traditional views about initiating a first date compared to women, they still generally felt responsible for picking up the bill. Men, you should probably expect to pay for the date, though there is a chance that your date will offer to split the bill with you.

What’s the worst possible thing that could happen on a first date? The most common concern was being stood up on their date (59% of daters). The second most common fear was that the conversation would not flow well (27%). The third most common fear for both genders was that their date would not be attractive (9%). However, this was a pretty confident bunch. Only 5% of those surveyed were most concerned with their date not finding them attractive. So, regardless of your gender, your date is probably worrying about the same thing that you are. Meeting together and having a great conversation is more important than how either of you look.

What makes or breaks a first date?

We found that both men and women ranked similar traits as being the most important aspect of a first date, only differing on what they valued as their top trait. Men valued physical attraction and women valued quality conversation as the most important parts of a first date, showing again that good conversation is important in a first date (and a conversation that isn’t flowing well can be a deal-breaker).  Men, your date may be more concerned with how well you can tell a story than whether your tie is on completely straight. Women, fear not! While men may be concerned with how you look, they also want to know who you are — quality conversation and common interests are close behind physical attraction in men’s top values. 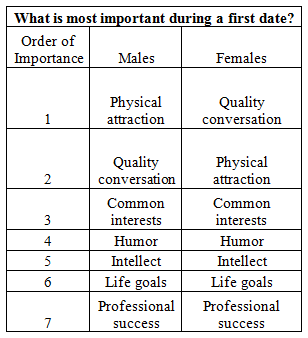 What should we talk about?

What did we learn about first dates?

Men and women did have some differences of opinion when it came to first dates, but we found many similarities. Both genders largely see eye-to-eye in what they are looking for on a first date, and they share the same fears about worst-case scenarios when it comes to meeting someone for the first time. However, when it comes to asking for the first date, men were more likely to think that either gender can initiate. Women, go ahead and make a move! Knowing that the person on the other end of the screen has similar hopes and fears makes it that much easier. Quality conversation is important for both men and women, and a bad conversation is much worse than having an unattractive date. Find common interests to talk about, and try to keep the discussion on things you both enjoy. And just have fun!